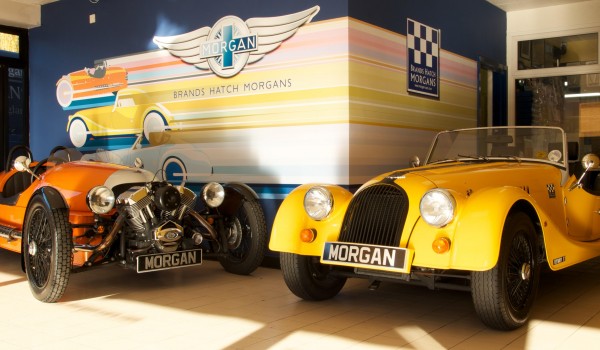 The roots of Brands Hatch Morgans can be traced back to 1982 when the company was formed with the sole aim of satisfying all the diverse requirements of Morgan owners.

In May 1987 the company moved to purpose-built workshops at the Brands Hatch motor racing circuit.  Two years later, Brands Hatch Morgans was honoured by the factory by being appointed as Service Agent in recognition of their commitment to Morgan owners.

In 1991 the Morgan Motor Company appointed Brands Hatch Morgans as a totally new Sales Agency to cover the South East of England.

In 1995 Brands Hatch Morgans moved to its current site in the centre of Borough Green, being on the A25 (midway between Sevenoaks and Maidstone) and just a few miles from the M20 and M26.

In 2007 there was a management buyout by three senior members of staff; Sarah Hutton, Keith Jackson and Brett Syndercombe.  The three new partners have gone on to build BHM’s reputation and popularity in the Morgan world, adding an exciting calendar of events each year for Morgan owners to enjoy.

Their efforts were rewarded by being voted:

for “outstanding levels of customer service”

The company’s facilities include a modern, brightly-lit showroom for the sale of pre-owned Morgans, Morgan demonstrators, a range of Morgan cars for hire.  The facilities also have a large workshop for the servicing, repair, race preparation and restoration of Morgans of all ages as well as a MoT bay.

Servicing and MoTs are also carried out for all cars for local residents and businesses, we also cater for all types of classic and sports cars.