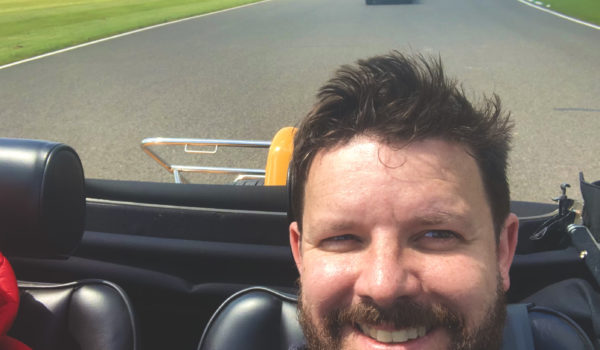 Goodwood 2021 from an Outsiders Perspective

Hello from a newly baptised Morgan fan. I’m Garry Stephens and for those that haven’t met me yet, I am the faceless, behind the scenes freelance web designer and aspiring photographer for Brands Hatch Morgan Kent.

I wasn’t expecting a love for Morgan’s as I come from a two wheeled motorsport background myself. Now retired due to injury, I have raced at clubman level for the BMCRC, my father being famed Two Stroke tuner Stan Stephens, and my brother being Harley Stephens of Holeshot PR, who manages the PR for Pirelli and Kawasaki racing. I’ve worked in the motorcycle trade as both a salesman and a web manager, however the closest I had gotten to a Morgan previously was when drag and sprint racing against them a lifetime ago. That said everything changed at Goodwood 2021!

Tuesday the 19th May, 2021 brought together over 100 Morgan’s of all shapes and sizes at the annual Brands Hatch Morgan track day at Goodwood. I was there to meet the community, take some photos and produce a couple of posts for the BHM social media platforms but never expected such camaraderie and a sense of community.

As soon as I arrived I had my tripod out and was snapping shots of the drivers setting up for the day, however a few moments later I had a tap on my shoulder from Sarah (Owner, director, front of house and the general face of BHM). She wanted to introduce me to some of the drivers, who were taking Morgan lovers out on a few fast laps of Goodwood. Moments later I was being bundled into a beautiful chromed bullet of a Plus 8 with driver Jack!

Now as mentioned I am a retired biker but a biker through and through, with broken collarbones, bolts in my knees and aches and pains that remind me of that daily. Climbing into that Morgan with Jack and listening to that beautiful machine took me straight back to my minitwins and V Twin race days. The engine vibrating gently up through me made me reminisce of my old race career but this time I was out of control with Jack in the pilots seat, smiling at me. I realised I was completely in his hands and just as we pulled away I heard him say something along the lines of “Hopefully I don’t have a spin this time” … queue my knuckles whitening and gripping the dashboard.

Accelerating off from the Pit Lane and into Madgwick Corner, I immediately realised I was in safe hands, Jack pushed the Plus 8 up to 70 and confidently drove the engine deeply into the corner. Smoothly bringing the power on mid corner and accelerating through Fordwater, he adeptly moved to a central line avoiding a little standing water and deftly clipped the apex. I know Jack was talking to me for the next few laps advising where best to lay off the power, and when to apply it. In all honesty though all I could hear was the beautiful engine and as all bikers would, I was busy trying to shift my weight and lean into the corner, whilst concentrating on when to make the next slick gear change.

The next few laps I just sat there grinning like the Cheshire Cat, watching the speedo push past 130mph, until we crossed the chequered flag with a wave from Sarah and Keith at the “finish line”, it wasn’t a race but wow what a feeling. Being that close to the track and feeling the engine growl, gave me a real appreciation for the Morgan that I just wasn’t expecting.

Walking around the pits, camera in hand, I enjoyed some beautiful coffee from the NAAFI Wagon and got to meet some amazing people. Chatting with drivers and pit crew, it was apparent that people were there not just there as fans of Morgan, but as fans of Brands Hatch Morgan Kent specifically. Every driver knew Sarah, Brett, Keith and Jamie and were so thankful to be able to meet up and share their passion once again, after such a long drawn out year.

I took some time out to chat with Jason Dodd, BHM’s professional photographer, and managed to prise some invaluable motorsport photography tips from him. We swapped photographic stories and compared lenses and equipment before he moved on to get a better angle from the track sidelines. Be sure to check out his gallery where you can purchase shots from the day https://www.photoalbumboutique.com/MOCGBPOD.

Time for lunch and I pulled up a seat with Morgan owner, Monica Pugh. We sat there in the sun, drinking our coffee, reviewing photos from the day and talking over her love of the Morgan. Monica explained she has had a passion for Morgan since she was a young girl and always aspired to be an owner. One day when visiting Brands Hatch Morgan Kent with her partner, she fell in love with a shiny red 1980 Morgan 4/4 and bit the bullet as a “birthday treat” there and then, she has never looked back.

A few moments later I was walking round the paddock listening to engines being tweaked and watching the Spitfires and Typhoons flying overhead. A free coffee from the NAAFI Wagon in exchange for some photos later and I spotted everyone was lining up for a gentile parade lap of the circuit. I spot a waving Monica lining up her current Mango yellow, 2017 Plus 4, in the Pit Lane who beckoned me over, she clicked the door open and said “Grab your camera, let’s go”. This was a totally different experience to the racing lap with Jack. Roof down, wind through my hair and camera poised. I was able to listen to a totally different engine; something more akin to a modern sports car, more of a purr than a growl. Snapping a few shots of Jason whilst he photographed me and driving in formation was quite the experience that I won’t be forgetting anytime soon.

Thank you all again for making me feel so welcome. It was an absolute pleasure meeting all of you and I am now a solid Morgan convert forever more.

We would welcome your own blog posts throughout the year. Any exciting moments, journeys or events, even write ups on your modifications and cleaning regime.